I confess, I am a lousy blogger. I owe a lot to this blog actually. Thanks to it, I made new friends, I made new discoveries, I even found clients! I neglect it and do not write often but maybe I should just accept this as a fact and move on. I may even have written exact same words before and do not remember.

Anyways, today was the anniversary of Hrant Dink's murder. A very painful memory... If you do not know what I am talking about here is the wikipedia link where you can read more about him and his assassination.

Today, taking today's meaning for me in account, I decided to start reading a book that I had for a while now, but kept postponing reading it: Grigoris Balakian's Armenian Golgotha. Here is how I came across this book: 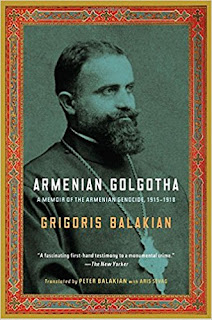 Some time ago I took an interest in the works and life of Komitas Vartabed, Armenian musician and pioneer of ethnomusicology . At first I was only interested in his work but then I came across his biography and found out that he was one of the hundreds of Armenians that were arrested and deported in April 1915. Through the intervention of some of his friends back in Istanbul, he was released and allowed to come back but what he saw during the deportation, the death and terror he witnessed left a scar on him. He lived the rest of his life in and out of hospitals fighting these memories until the day he died in a psychiatric clinic.
His tragic story shook me. I can say that I have been thinking of him ever since. Not sure why, but I feel some kind of kinship, some kind of closeness to him. Maybe it is his work, his love for music. Anyway, that is how I decided to find out more about him and started collecting some books talking about the times he lived in in and some eyewitness accounts. Balakian's work is in that sense a gem: not only does he tell us about the Armenian genocide, and gives first hand information but he also discusses the political and economic climate before and after the genocide. Most important of all, he knew Komitas and was with him during his deportation.

Would you like a quick and good summary of his life? On Wikipedia you can read about him. On this youtube channel that belongs to Manuk Harutyunyan, you can hear wonderful interpretations of his work. Such as this :

I will try to share my findings on him through the blog if I can find the time. Meanwhile any recommendations and help is much appreciated!